Entrepreneurship is a central part of Innocent’s culture – the company advises celebrating heritage while always looking for ways to change things to make them better.

“Find the stars and let them shine – recruit smart people and let them get on with it, with support, autonomy and without fear of failure.” 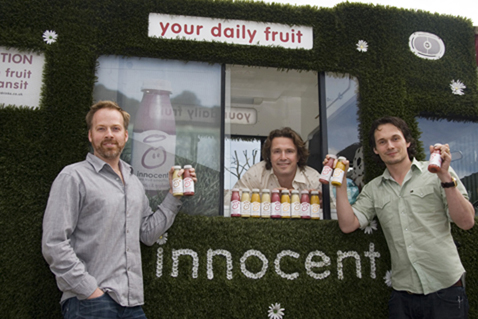 Innocent produces smoothies, juices and vegetable pots that are sold in supermarkets, coffee shops and other outlets. Headquartered in London, Innocent retails across Europe, employing a staff of 240, of whom 200 are based in London. In 2012 budgeted revenue is £200 million. Although Coca-Cola now owns 58% of the company, the three founders retain full operational control.

“We put up a big sign asking people if they thought we should give up our jobs to make smoothies, and put a bin saying ‘Yes’ and a bin saying ‘No” in front of the stall. Then we got people to vote with their empties. At the end of the weekend, the ‘Yes’ bin was full, so we resigned from our jobs the next day and got cracking.”

At Innocent, innovation is an everyday behaviour with employees actively encouraged to suggest ways to improve the business, whether it be new products and business streams or better ways of working.

The regular model of innovation – cross-functional teams with steering meetings – was found to deliver only line extensions rather than breakthrough innovation. Instead, Innocent creates innovation in variety of ways:

Veg Pots – In 2008/9 Claire arrived on secondment and was given the brief to find the ‘next big thing’ for Innocent. She suggested that Innocent could do for vegetables what they had done for fruit – upgrade them.

With management support, Claire began the process of developing the idea, pulling in resources from across Innocent. The Veg Pot line is now worth £30 million at retail.

Fortune – Giles was working at Innocent in production. He suggested that rather than each function – finance, commercial, supply chain – having their own planning/forecasting reports, the process should be simplified, producing one number that everyone agreed on.

Producing fresh products with short shelf lives, it is crucial to get forecasting/planning right. Giles pitched his idea to the founders and was given sponsorship to make it happen. The Fortune system did exactly what Giles suggested. The impact on the business was huge: fulfilment before Fortune was at 97.5%, it rose to over 99%. The level of wastage dropped to 0.2% wastage, an amazing reduction compared to the 2-3% level before Fortune was implemented.

This Water – Juicy Water had been introduced in 2002 as a great-tasting alternative to water, but it had not performed as well as other product lines. Douglas joined Innocent in 2007 in a New Opportunities Role. He suggested a major rebranding of Juicy and re-launching it as a separate entity. This Water was introduced in 2007 and retail sales went from £8 million to £30 million, making larger profits than Innocent. 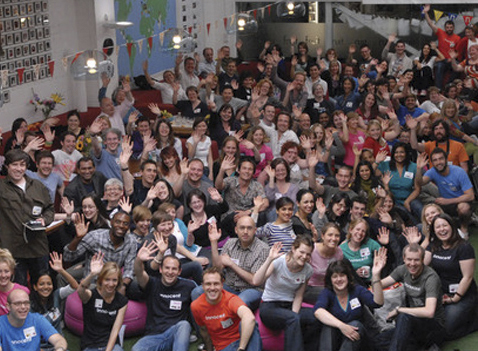 Transparent and Detailed Communication: every month the Innocent founders hold a company-wide meeting where they give a monthly finance update sharing with employees all the key finance figures and how the company is doing. Everyone is encouraged to ask questions and to provide feedback but most of all, understand how the business works. Innocent believes that transparency with employees encourages people to get involved at a deeper level than just performing their roles.

Learn from Failure: Because employees are encouraged to try new things, no one is ever ‘beaten up’ for failure. Instead, the company gets together to talk about the lessons that can be drawn from the failure. Management also talk about the mistakes they’ve made, to demonstrate that everyone is in it together.

Mix it Up: the HQ in London is spread over four open-plan floors but seating is allocated randomly including management. This way, everyone gets maximum visibility and interacts with people from different functions. They get a broader understanding of different roles and how, holistically, Innocent works.

Visibility: Senior management’s visibility ensures that employees know they can be approached at any time with ideas, suggestions and feedback.

Taking the Pulse: a survey is conducted across the whole company every quarter on motivation and whether employees would recommend others to work at Innocent. This is followed up with an annual deep dive. Both pulse checks allow management to understand employee frustrations as well as gauge how motivated and excited employees are with the business.